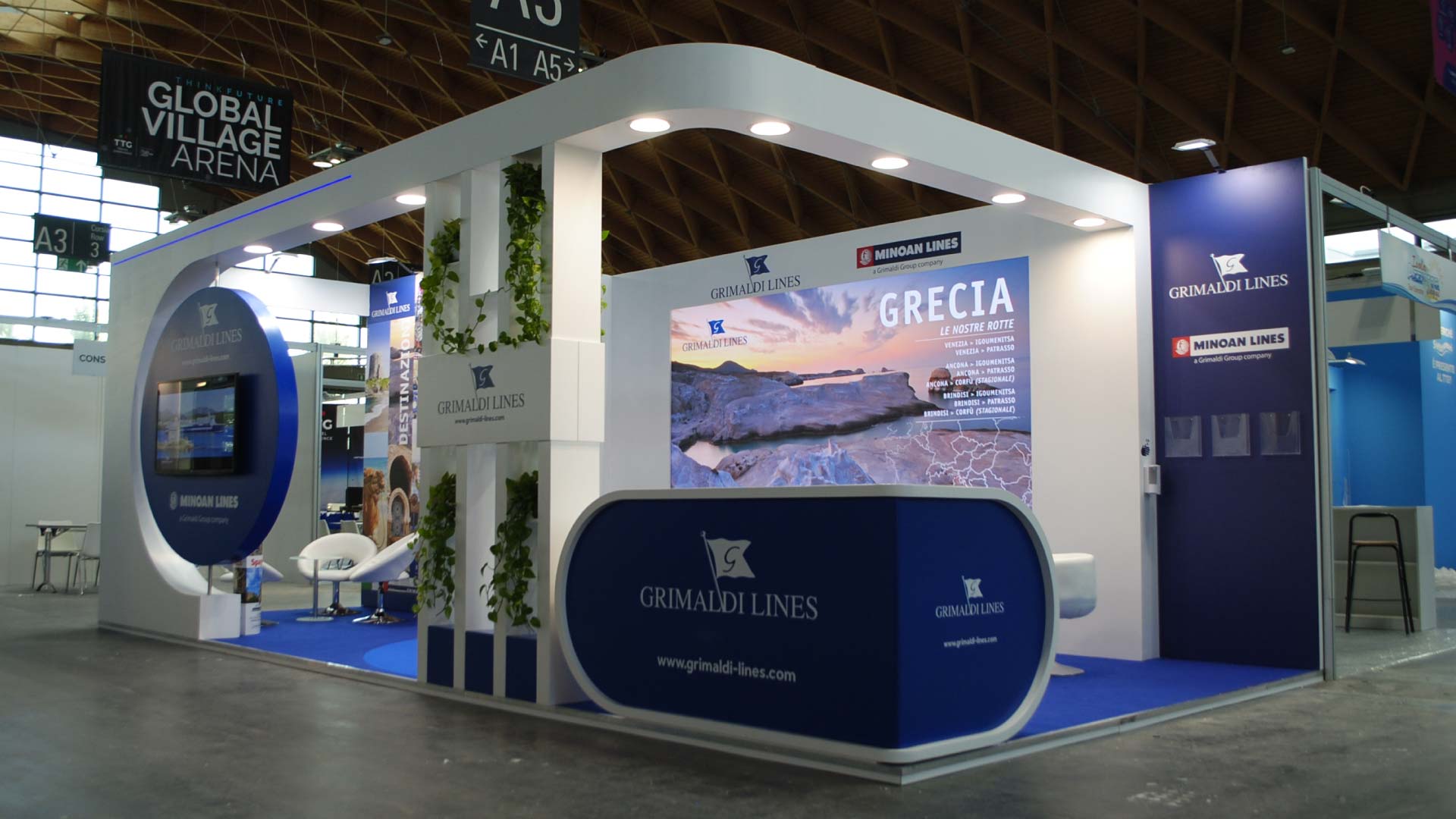 For many years now we have been designing and setting up exhibition stands for travel trade show for Grimaldi Lines, many of which are itinerant booth, usually the stand is mounted in several exhibitions, TTG Rimini and BTM Naples in Italy, but also ITB Berlin in Europe, all very important trade fairs in the tourism sector. We take care of design, construction, transport and finally of the storage of the stand. We adapt the style from year to year, keeping up with the times, so we have gone from large backlit walls to ledwalls capable of better conveying the message of the maritime group at trade fairs in it is important to make the many offers in progress clearly visible. In some editions touch screens have been included to make the visitor interact better, allowing them to “navigate” between the various packages offered. Obviously, great attention is paid to hospitality and comfort inside the exhibition stands for travel trade show, this to reflect the corporate values ​​of Grimaldi Lines, thus giving a preview of the comfortable environment that they can find inside their ships. Style and elegance complete the message they want to convey. 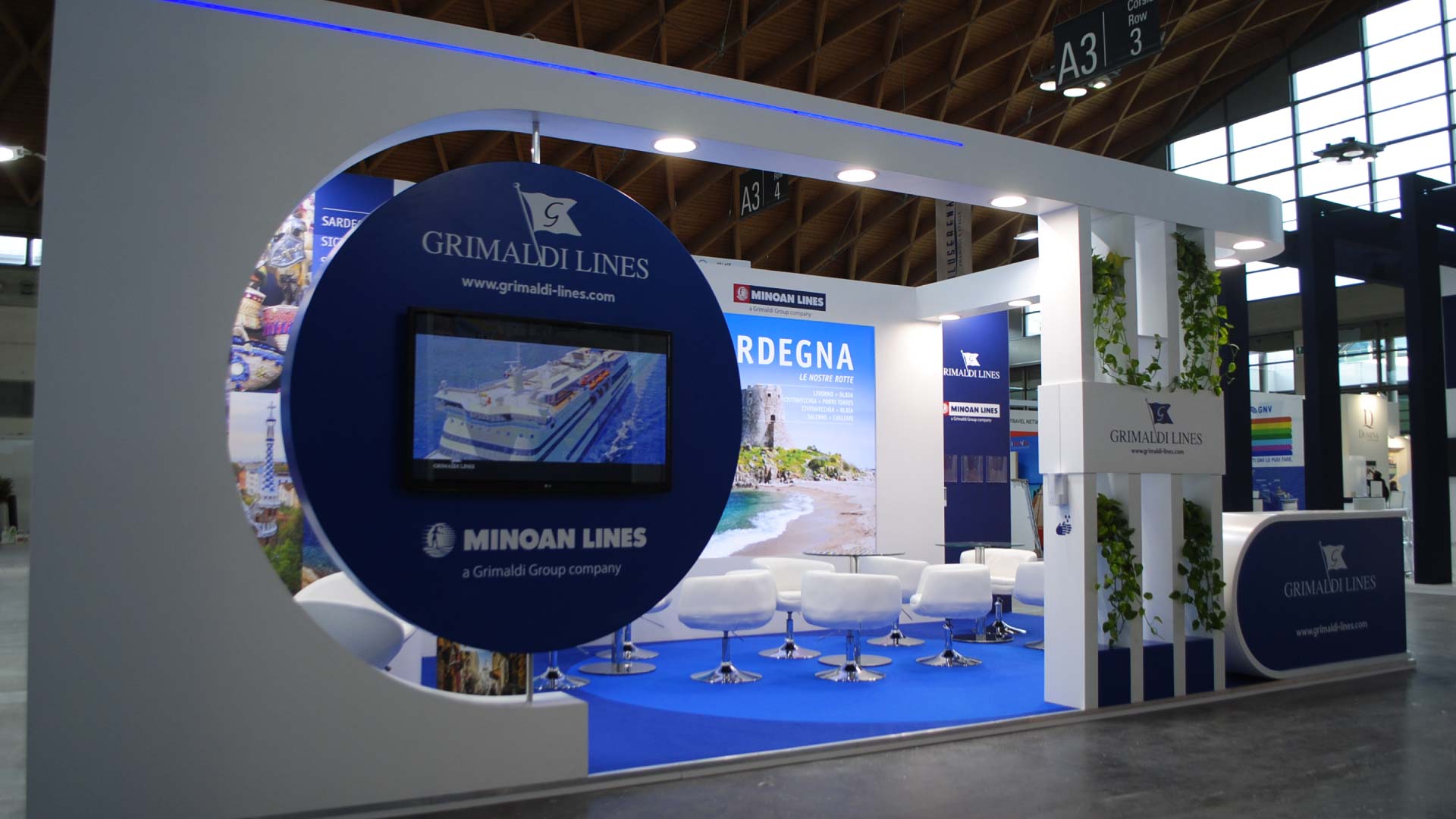 Some more information about our customer:

Grimaldi Lines is a shipping company, founded in Palermo in 1947 with the name of “Sicula Oceanica S.A.” thanks to the Grimaldi brothers, children of Amelia Lauro in Grimaldi and grandsons of the shipowner Achille Lauro, their fleet was made up of cargo ships dating back to the First World War to be refitted to make ships for emigrants and refugees which, as in the case of uncle, the Grimaldis decided to buy at low cost in the post-war market.

In January 1949 the steamship Ruahine was acquired from New Zealand which, after being refitted and renamed Auriga, sailed between Italy and Central America. This was followed by the acquisitions of the steamships City of Hong Kong and Prince Robert, renamed Centauro and Lucania respectively.

From 1983 to 1996 the Grimaldi group operated in the cruise service with the Ausonia Cruise brand and the turboship Ausonia, previously belonging to Italia Crociere Internazionali and which, in 1998, was supplied by a Cyprus shipowner.

The company was founded in 1999 by Guido Grimaldi, with the aim of starting a service within the “Autostrade del Mare” project. The shipping company purchases the Freccia Blu and Malta Express motor ships, with which it begins the first freight connections between Italy, Spain and Malta. In 2000 the company also began to carry out passenger services: the first open routes connect Italy (Civitavecchia, Salerno and Palermo) to Spain (Barcelona), the French Riviera (Toulon), Corsica (Porto Vecchio) and Tunisia (Tunis).

Over time, numerous routes are open, several ships are purchased and the company goes through a period of growth: today the company connects the major Italian ports also to Sardinia, Sicily, Greece and Morocco. Recently the company moved its operations center from Salerno to Civitavecchia. 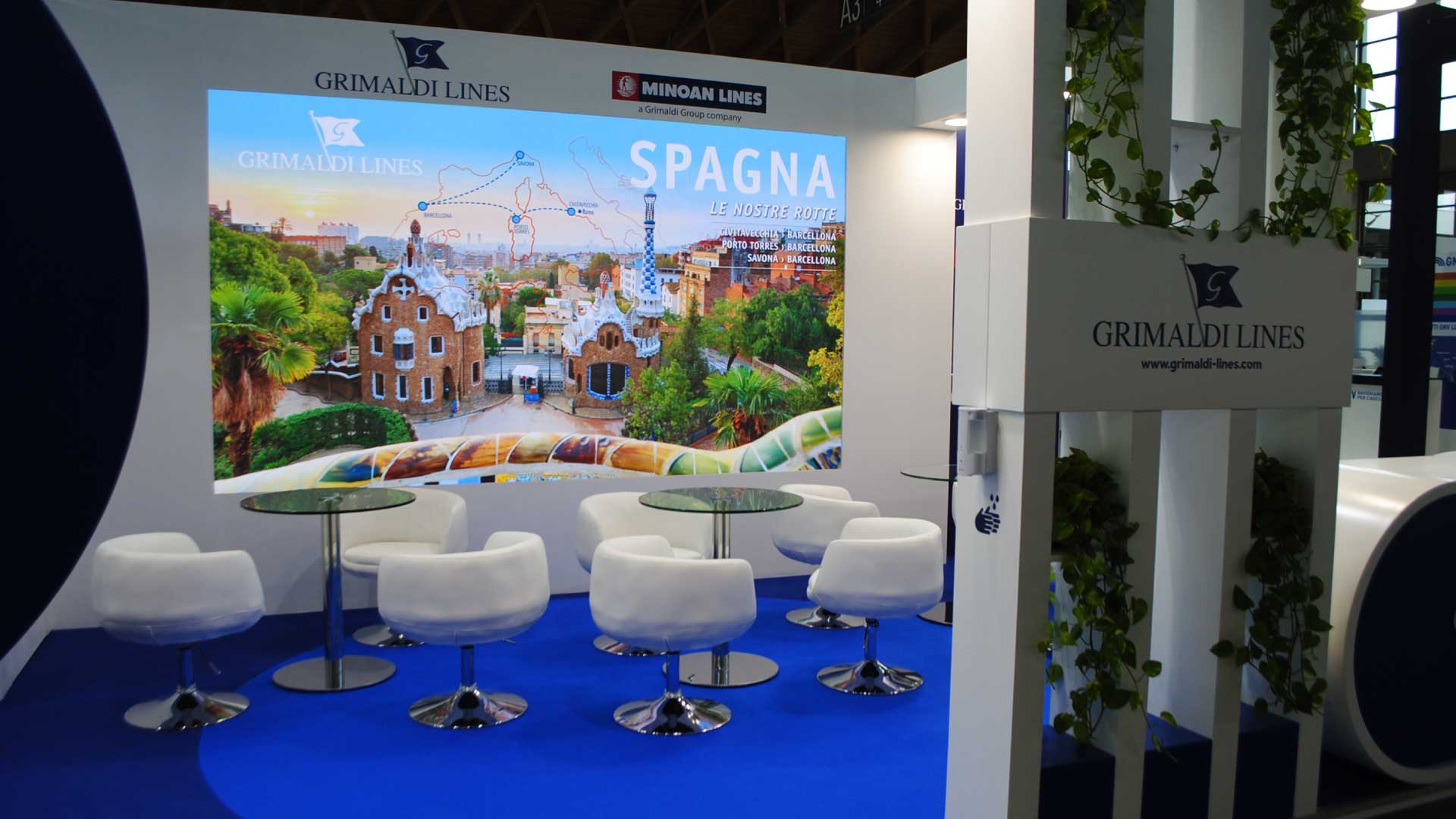 The travel trade shows where we usually set up for Grimaldi Lines are the following:

TTG Rimini is the Italian reference event for the promotion of world tourism in Italy and for the marketing of the Italian tourist offer in the world.

BMT Napoli, Mediterranean Tourism Exchange, is the only major tourism fair in the Mediterranean that has reached its twenty-fourth edition.

ITB Berlin is one of the leading business platforms for global tourism offers. In addition to the very high satisfaction of exhibitors (over 90%), the numbers offer further proof: this is where offer meets demand.

Obviously, we was presents to these fairs also for other customers, including the Ethiopian Tourist Board and the online travel company Emerging travel. 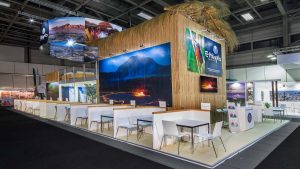 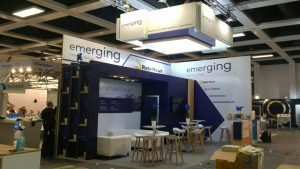 stand created for ITB Berlin and adapted for WTM London 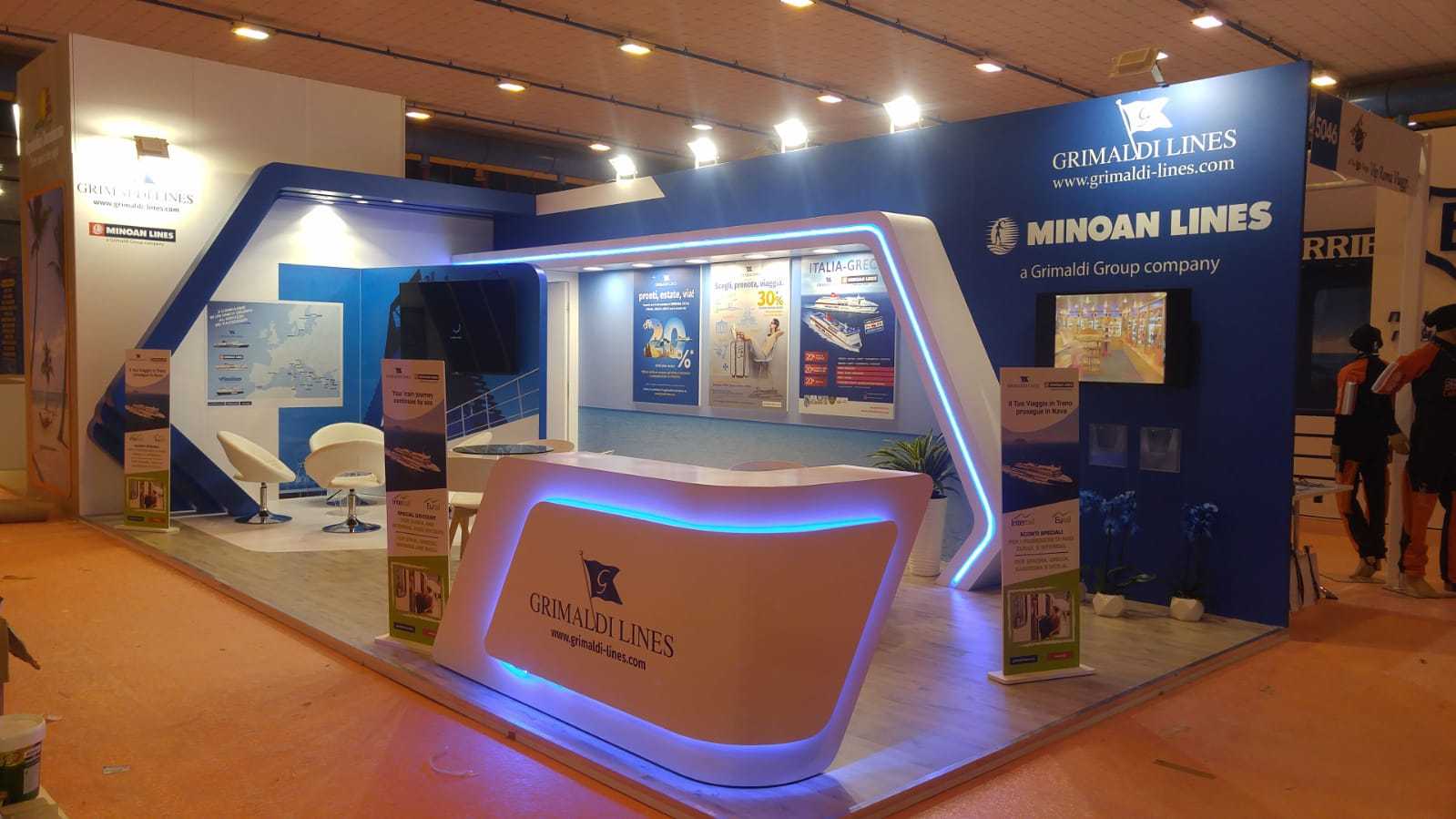 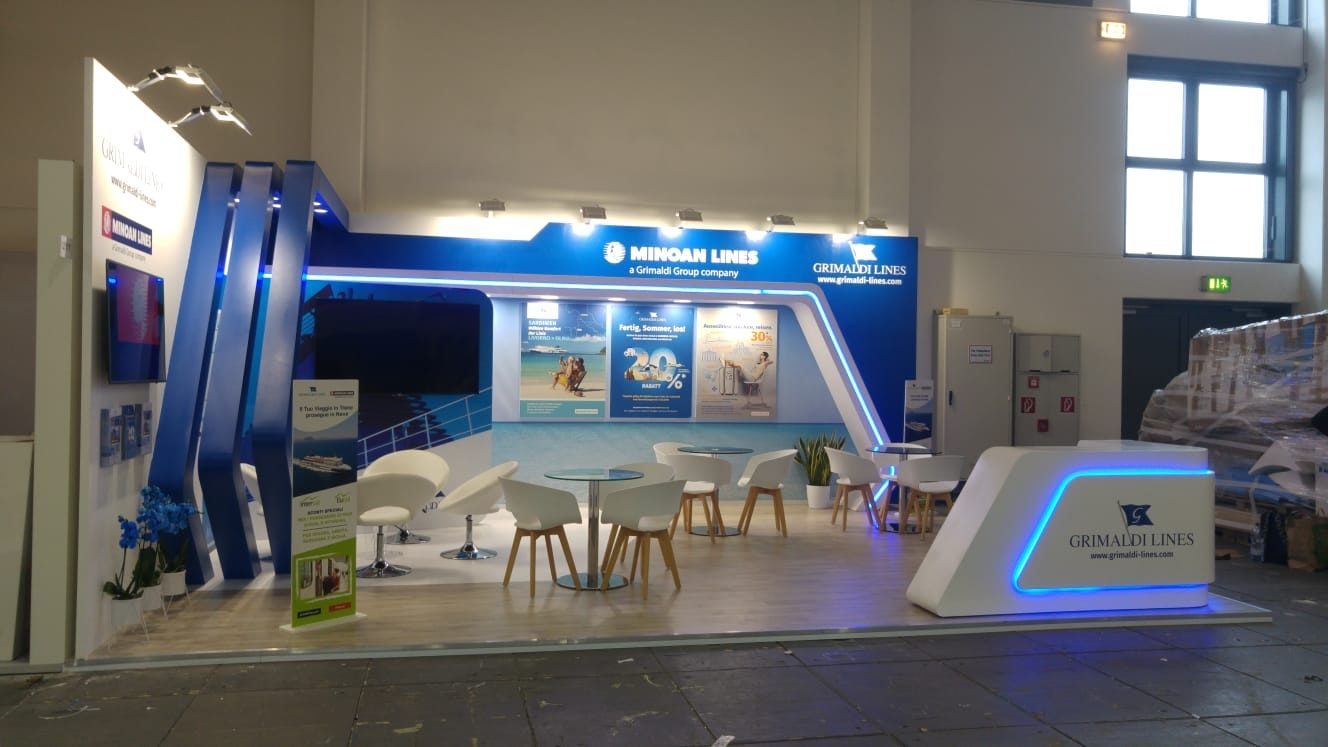 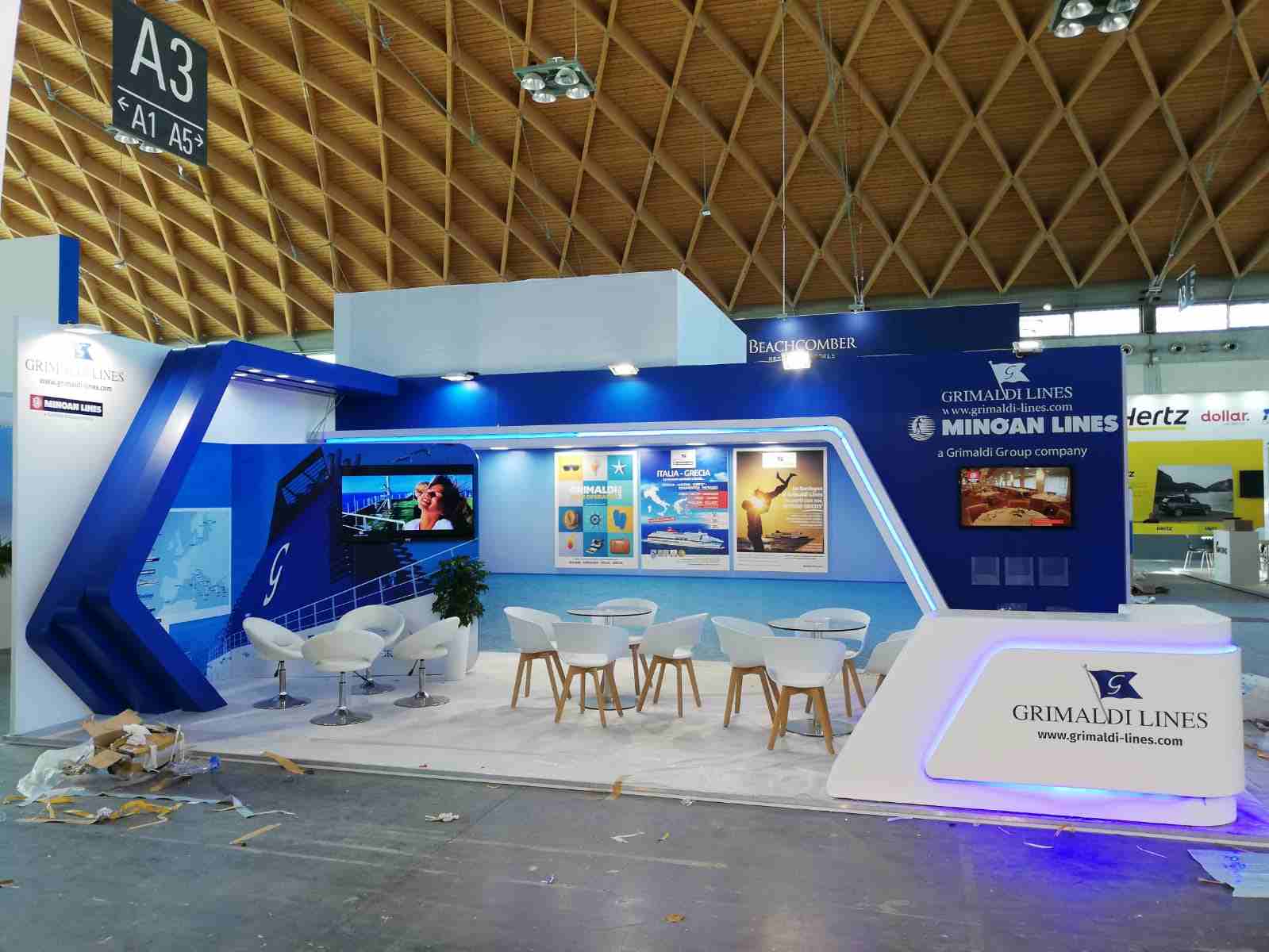 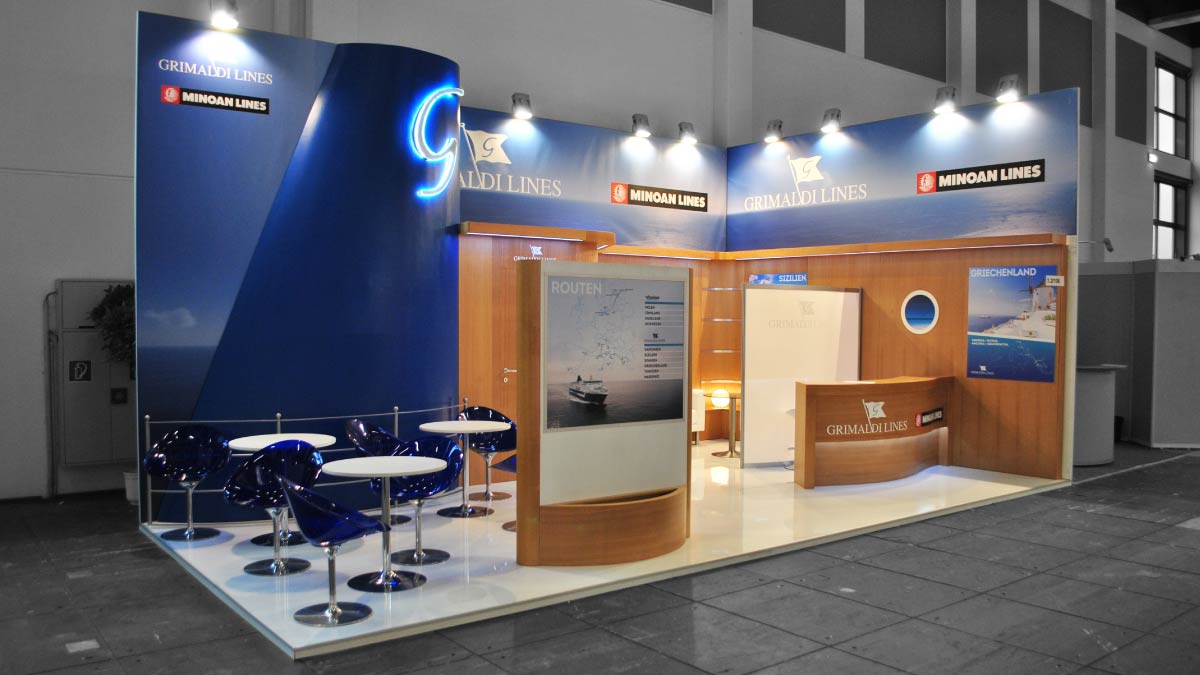 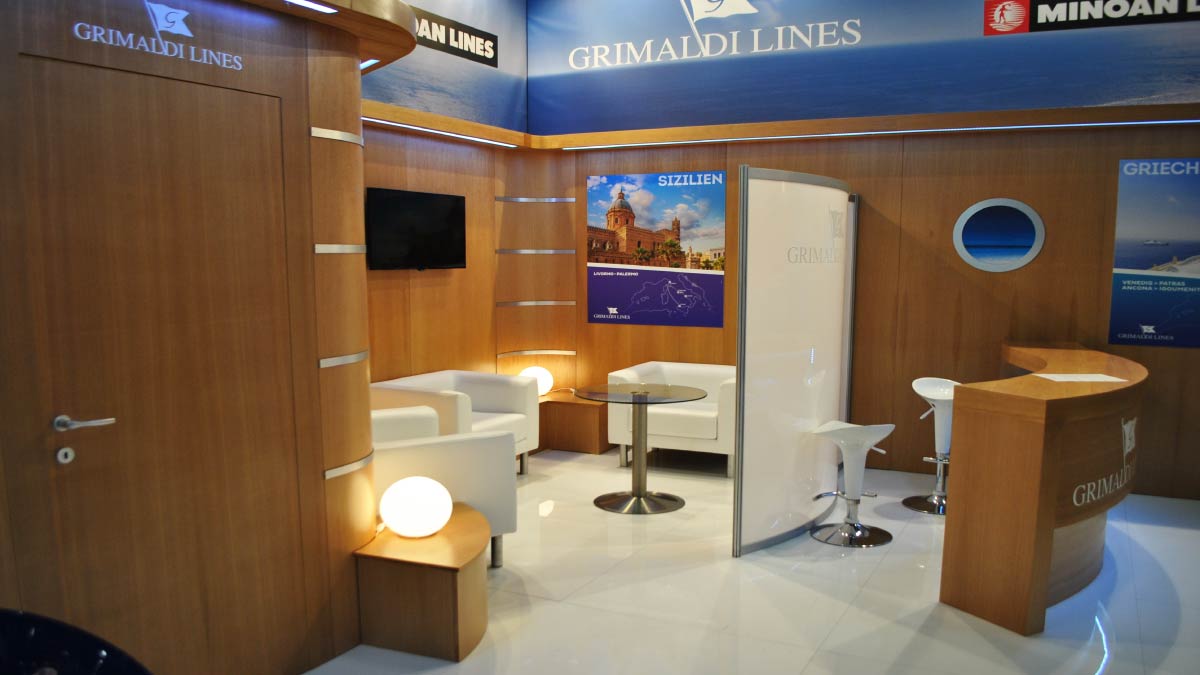 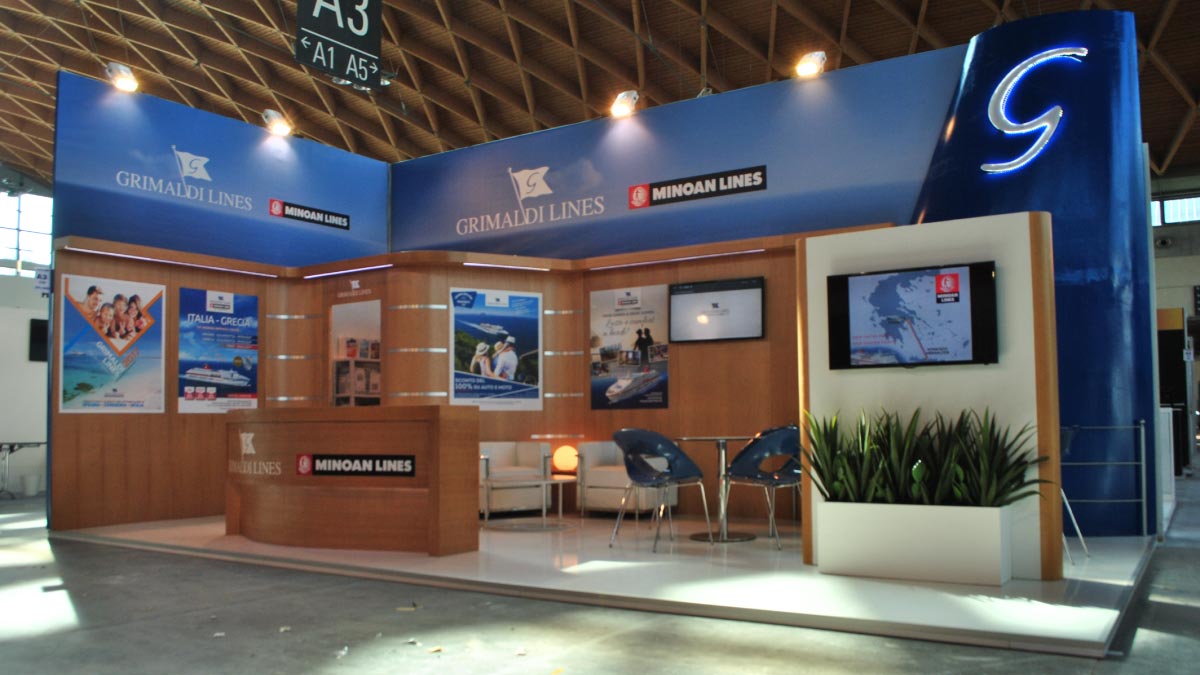 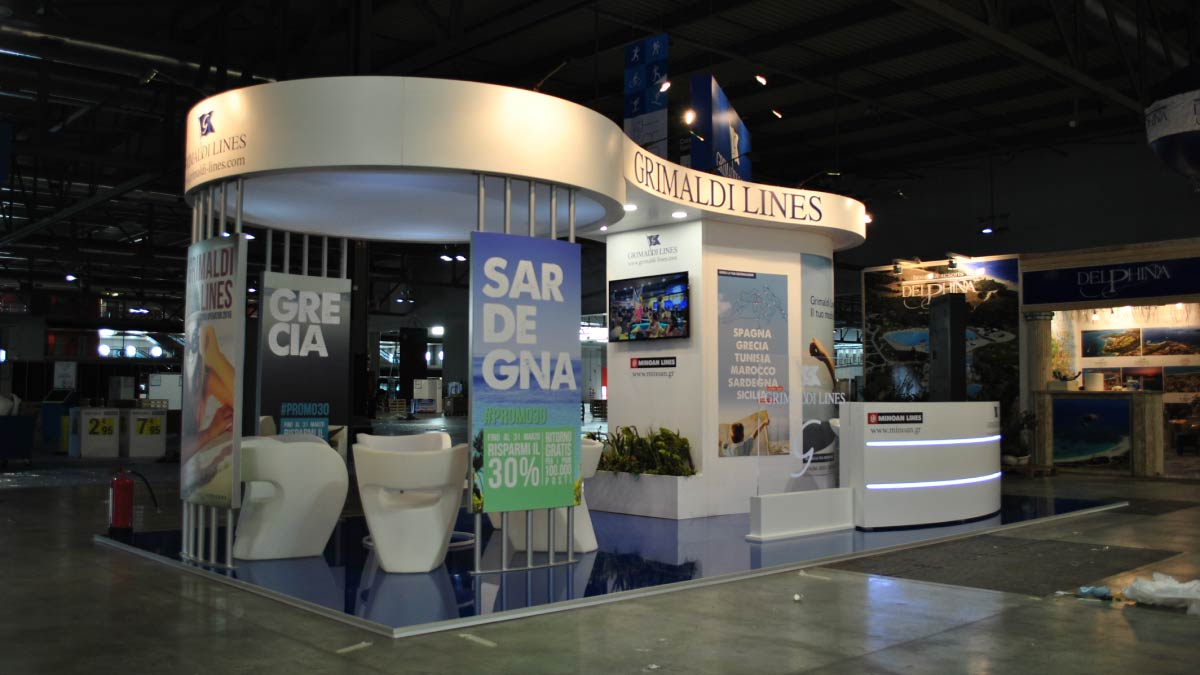 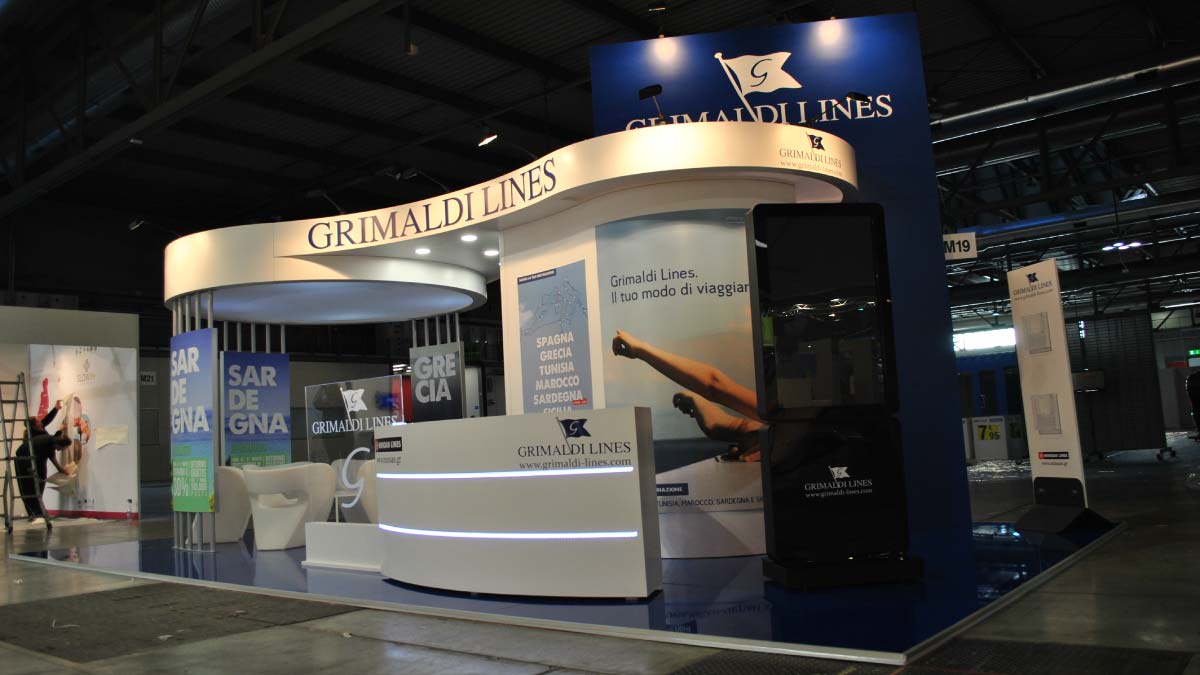 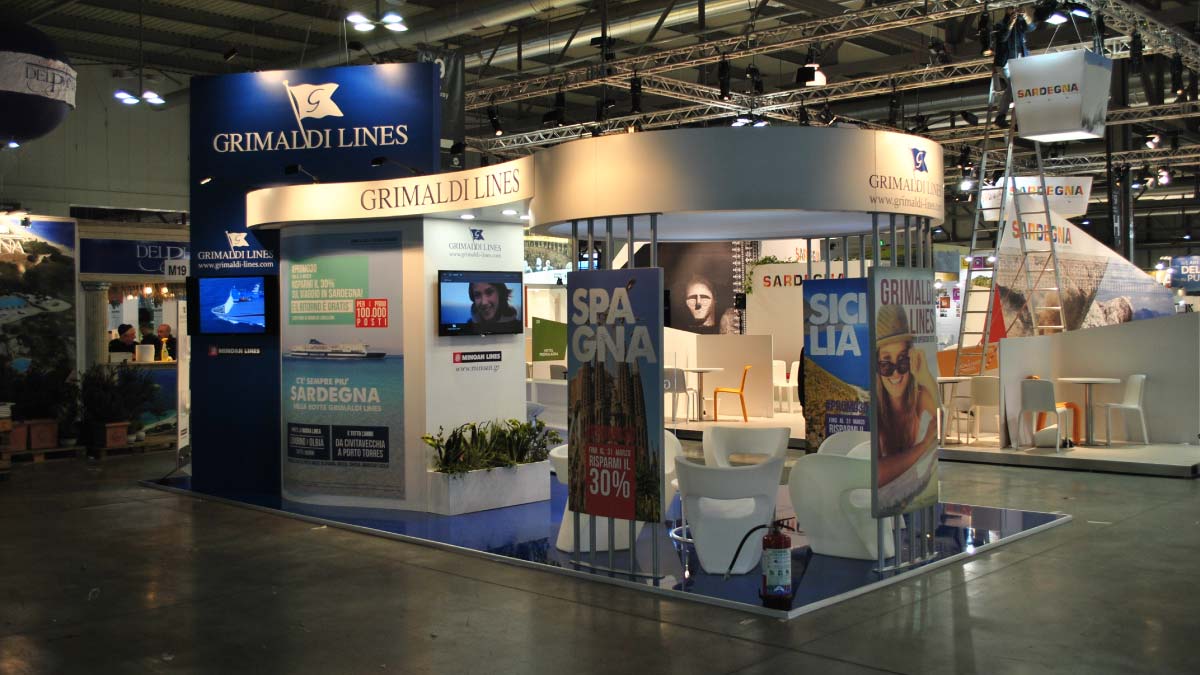 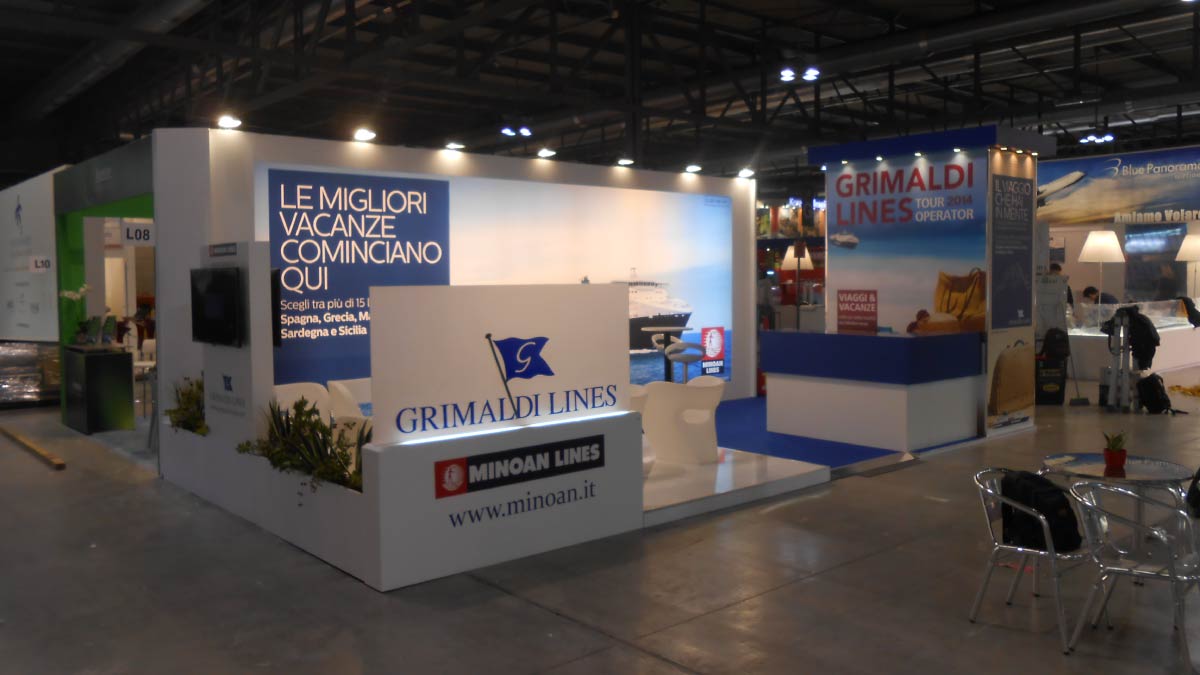 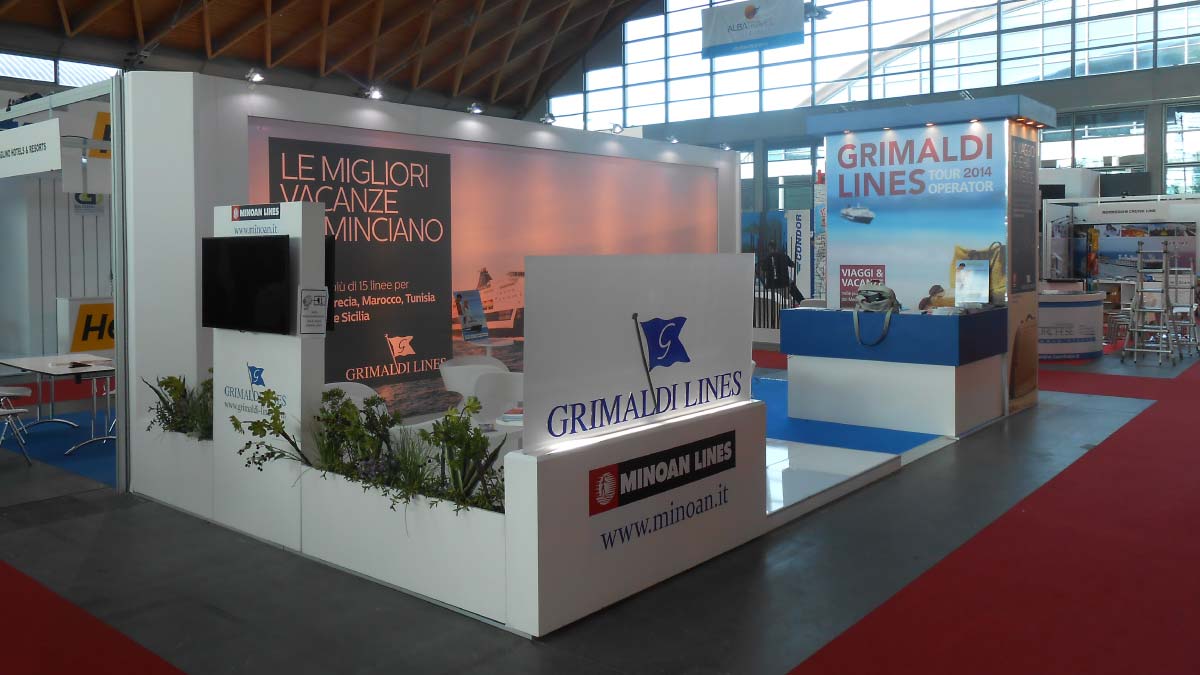 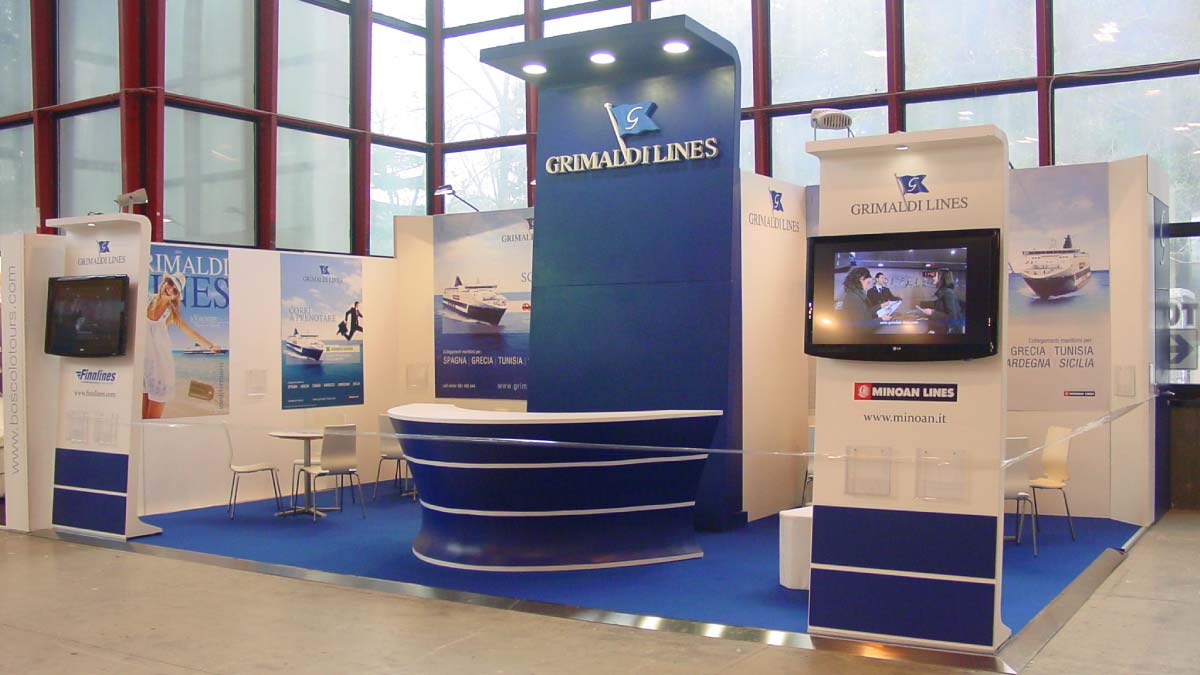